ALPHARETTA, Ga., July 8, 2016 /PRNewswire/ — This really was a space odyssey for one presidential candidate bobblehead.  Bobbleheads.com attached a bobblehead of Donald Trump, standing on a podium flanked by American flags, to a high altitude weather balloon. The bobblehead was trimmed for weight and carried three GPS trackers and a camera to record the momentous event.  The launch occurred in Suwanee, Georgia.

Why send the bobblehead into space? Warren Royal, founder of Bobbleheads.com, got the idea from a 2012 “Obama in Space” video on YouTube. “The Obama bobblehead was one of our Royal Bobbles products and I thought that was really cool,” Royal said. “Since then, we have been trying to find the right product and the right time to do it, and with the upcoming election, we felt that this was a great time.”

“We decided to go with Mr. Trump first because he is far and away our best-selling bobblehead at the moment. We figured that we would do him first and then if we had the time, we would try to do Hillary and other popular figures later.”

Royal also wanted to make it perfectly clear that this was non-partisan, simply meant to be a fun event. “We’re not taking sides,” he added – “We have something for everyone.”

It took nine months of planning to prep for the Trump space launch and a team of five people with engineering, GPS satellite tracking, video and bobblehead experience to pull this together. They also had to file a flight plan and get clearance from the FAA.

The helium-filled balloon, with the Trump bobble and the “payload,” lifted off on Sunday, May 15. It climbed to an altitude of 103,339 feet, which took about two hours; then the balloon burst, which it is designed to do at that height.

The bobblehead landed in Abbeville, SC, about 3.5 hours from the launch site, at the top of a very tall tree. Royal said the landowner helped retrieve it, knocking it down with a few well-placed shotgun blasts.

“This was more time-consuming and complicated than we thought,” said Royal. “We are glad we did it, though, it was amazing!”

The entire launch assembly – bobblehead, podium, flags and microphone – will be displayed in a shadowbox at the company’s Georgia headquarters.

For video of the launch, check out this link.  A second “behind the scenes” video of the retrieval is in production now and will be published soon.

Bobbleheads.com, based in Alpharetta, Ga., designs and manufactures top quality bobbleheads. We pride ourselves on producing the finest collectibles of this type, including custom, one-of-a-kind designs. We offer our extensive collection of bobbleheads – including the Royal Bobbles brand — through our ecommerce website, and we wholesale thousands of products to museums, gift shops, online stores and mail order catalogs nationwide.

Royal Bobbles was chosen by its customer Applied Underwriters to produce a giant bobblehead of its company mascot “Goldie” – the world’s largest, in fact, for a special event.  It was difficult, but we delivered!

On April 8, 2016, an official Guinness World Records achievement was awarded for the bobblehead, which stands at an official 15 feet, 4.75 inches.   Here are photos which show that remarkable achievement.

Independent news stories about this:

On October 1, the Fox TV show “Sleepy Hollow” featured our lifesized Ben Franklin and George Washington bobbleheads.   You can also see our small versions in the background.  They were a big hit! 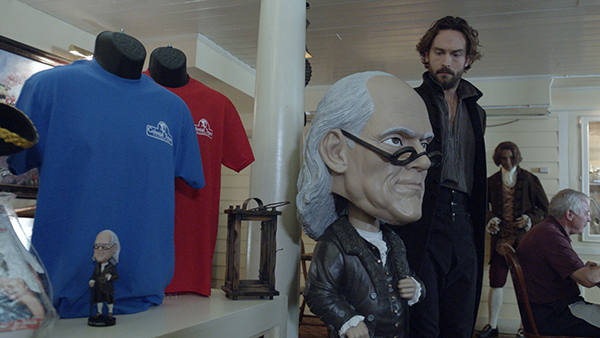