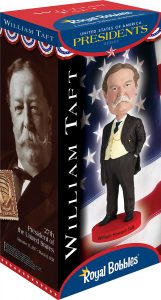 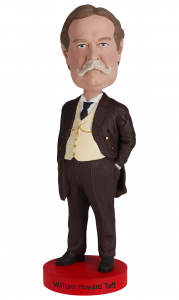 William Howard Taft was born in Cincinnati, OH on September 15, 1857, to parents Alphonso and Louise Taft. Taft’s father was a prominent judge, greatly influencing the path that he would follow in his own career. Taft attended Yale University with the intent of pursuing a career in law, and a dream of one day gaining a seat on the Supreme Court.

Taft was elected as the 27th president of the United States in 1909, where his greatest contributions led to efforts in busting trusts, the empowerment of the ICC to set railroad rates, setting mandates for a federal income tax, and establishing the direct election of senators by the American people. He would only serve one four-year term as president.

In 1921 Taft was appointed chief justice of the U.S. Supreme Court by President Warren G. Harding, making Taft the only president to have also served the post of chief justice. Taft served in this position until he died on March 8, 1930.