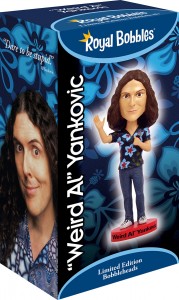 “Weird Al” Yankovic is a three-time Grammy Award winning musical parodist responsible for hit songs like “Amish Paradise,” “Eat It,” and “White & Nerdy.” He is undoubtedly the most successful comedy recording artist of all-time, with over 11 million albums sold worldwide. Having taken his first accordion lesson the day before his sixth birthday, Yankovic caught his big break in college after sending one of his recordings to the Dr. Demento Radio Show. The song, a parody of The Knack’s “My Sharona” called “My Bologna,” received a positive reaction and eventually earned him a sixth month recording contract from Capital Records.