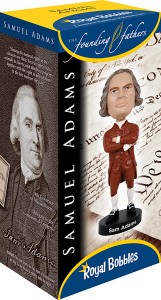 Samuel Adams was a statesman, political philosopher, and one of the Founding Fathers of the United States. As a politician in colonial Massachusetts, Adams was a leader of the movement that became the American Revolution and was one of the architects of the principles of American republicanism that shaped the political culture of the United States. He was a second cousin to John Adams.

Adams was a part of a movement opposed to the British Parliament’s efforts to tax the British American colonies without their consent. His 1768 circular letter calling for colonial cooperation prompted the occupation of Boston by British soldiers, eventually resulting in the Boston Massacre of 1770. Continued resistance to British policy resulted in the 1773 Boston Tea Party and the coming of the American Revolution.