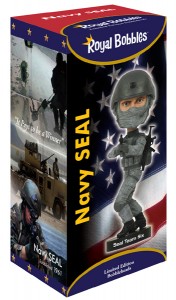 Navy SEALs are members of a Naval Special Warfare unit who are trained for unconventional warfare. SEAL is an acronym for Sea, Air, and Land. SEAL missions are classified, with the general public only being allowed to know of their heroic efforts after their mission is completed. SEALs rescued Captain Richard Phillips when his freighter was attacked by Somali pirates in 2009, and in 2011 SEAL Team Six killed the United States Most Wanted Fugitive, Osama bin Laden.

NOTE: Royal Bobbles donates 10% of all sales to the Navy SEAL Foundation, to support these warriors and their families.