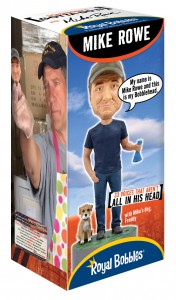 We spoke up and told him that we thought we could do it.  And we did!  We agreed to produce a small limited-edition run of 100 Made-in-the-USA Mike Rowe bobbleheads.  It turned out to be a great success. Each one is individually hand-made and painted by Rachael and her team here in our Alpharetta Georgia office, and is hand-signed by Mike, and includes a postcard signed by the artists who made and painted it. 100% of the proceeds go toward the Foundation.  The first one sold at auction for over $8,000 and total funds raised to date have exceeded $23,000 for the Foundation.  These signed, made-in-the-USA bobbleheads are ONLY available via the foundation website at www.mikeroweWorks.com/bobblehead .

And then this experience was documented on Mike’s new show “Somebody’s Gotta Do It” on CNN.  Here is a clip from that show:

However, the project was so successful that many fans expressed an interest in having a more affordable version.  Warren asked if he could produce a separate version, under license, which:

In this way, the bobbleheads can be made available at a reasonable price to fans who could not afford one of the exclusive Made-in-the-USA versions.