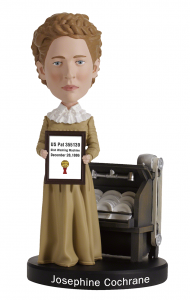 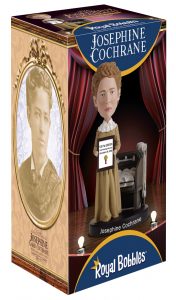 Josephine Cochrane, a socialite who frequently hosted extravagant parties, set out to find an existing machine that would properly wash her heirloom china while eliminating the risk of damage from handwashing. Her attempts in doing so were unsuccessful, leading her to begin developing her own idea. Cochrane struggled to get the final product produced complaining that “I couldn’t get men to do things I wanted in my way until they tried and failed in their own.” She was finally able to find someone to build the product to her specifications and on December 28, 1886, US Patent No. 355,139 was granted to Josephine Cochrane for a Dish Washing Machine. In 1893 she showed her invention at the Chicago World’s Fair where she won top honors for the “best mechanical construction, durability and adaptation to its line of work.” She continued to make improvements to her invention. A second patent was eventually granted for her invention in 1917 (US Patent No. 1,223,380). Josephine Cochrane founded the Crescent Washing Machine Company to manufacture her invention. The company was acquired by the Hobart Manufacturing Company in 1916, three years after her death. Hobart introduced dishwashers for home use under the KitchenAid brand. In 1986, KitchenAid was acquired by Whirlpool. Josephine Cochrane was inducted into the National Inventors Hall of Fame in 2006.