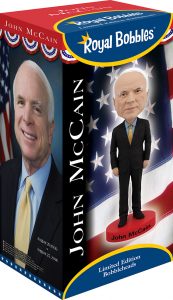 John Sidney McCain III was born on August 29, 1936, at the Coco Solo Naval Air Station in the Panama Canal Zone to Lt. John S. “Jack” McCain, Jr. and his wife, Roberta Wright. He was the son and grandson of Navy Admirals, and his connection to the Navy was very strong, leading McCain to become a pilot in the US Navy, himself.

John McCain would spend over 60 years in service to his country, spanning his time in the U.S. Navy and the U.S. House and Senate. Throughout his service, he received the Silver Star, two Legion of Merits, the Distinguished Flying Cross, three Bronze Stars, two Purple Hearts, and the POW medal.

Nicknamed “The Maverick” because he followed his heart and the beat of his drum, McCain was known for often going against his party when he felt it was needed. He was also renowned for his bipartisanship stance and reaching across the aisle to make progress for the betterment of the American people.