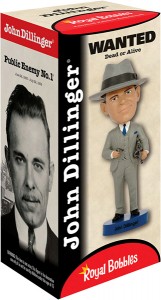 John Herbert Dillinger Jr. was an American bank robber in the Midwest during the early 1930s. He is robbed at least two dozen banks and four police stations, escaped from jail twice and was idolized by some as a modern-day Robin Hood.

Dillinger’s exploits were sensationalized across the nation, and his numerous escapes and robberies fed many urban legends in the United States. He still stirs the American public’s fascination with colorful criminals. Several movies have been made about his life and death; the latest, Public Enemies, stars Johnny Depp as Dillinger and Christian Bale as Bureau of Investigation agent Purvis.

This officially licensed John Dillinger bobblehead features a removable fedora – a touch you won’t see anywhere other than Royal Bobbles.