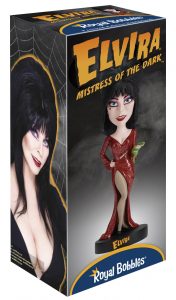 This Elvira bobblehead is part of Royal Bobbles’ collection of pop icons. This collection features icons in pop culture, whom we all love and cherish. The talented actress Cassandra Peterson is the creator of this well-known witchy and vampire-like character on the show, “Elvira’s Movie Macabre.” When you hear the name Elvira, only one person comes to mind: Halloween icon and quintessential symbol of all things spooky, the one and only Mistress of the Dark. In 1981, who could have imagined the hostess of a local Hollywood Horror movie show would grow to become a household name? Elvira was the first horror host ever to be syndicated nationally and has emerged as one of the most original and outrageous characters in popular culture today. Elvira’s reign as ‘Queen of Halloween’ has now spanned thirty-five years and includes two feature films (“Elvira, Mistress of the Dark,” and “Elvira’s Haunted Hills”) as well as hundreds of TV shows and live appearances.