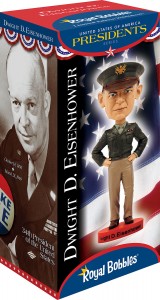 Dwight David “Ike” Eisenhower was the Supreme Commander of Allied Forces in Europe during World War II, General of the Army (5 stars) at the time of Germany’s surrender, President of Columbia University and the 34th President of the United States. The policies of his administration during his two terms in office resulted in a continued rise in postwar prosperity in America.