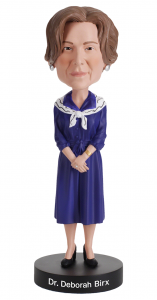 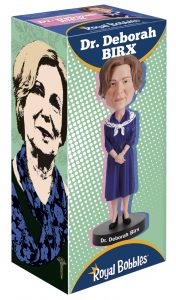 Dr. Deborah Leah Birx was born in Carlisle, Pennsylvania, the youngest of three children, Donald, a mathematician and electrical engineer, and Adele Sparks Birx, a nursing educator. Birx’s early life was fueled by curiosity, making up science-related explorations with her older brothers in their makeshift laboratory (also known as the shed in their backyard). She quickly took to competing and winning at science fairs, further magnifying her passion for the sciences.

She excelled in higher learning, earning a bachelor’s degree in chemistry at Houghton College in two years, followed by her doctorate in medicine from the Hershey Medical Center at Penn State. Birx also served her country in the United States Army, achieving the rare high rank of Colonel before retiring in 2008. It was during this tenure, Birx worked alongside Dr. Anthony Fauci at Walter Reed Army Medical Center.

With her thirst for knowledge, Birx changed course, heading into medical research, attaining Director of the United States Military HIV Research Program. She led a clinical trial creating the first vaccine to reduce the risk of contracting HIV.

By 2014 Birx was appointed, by President Barack Obama, to the post of Ambassador at Large and U.S. Global AIDS Coordinator. To this day, she continues her work with HIV prevention in a program she created called DREAMS (Determined, Resilient, Empowered, AIDS-free, Mentored, and Safe), a public-private partnership focused on reducing adolescent infection rates.

She was recently appointed White House Coronavirus Response Coordinator, part of the Coronavirus Task Force, where she guides to help support the American public as they face a global pandemic.